“What we hope for and wish for equate to fantasy; but what we strive for and we work for is our ambition.” – Derek John Fisher

“It’s too cold to work dogs. Have some more spiced wine and let’s talk about what it’s going to take for Biz to win Nursery this year.” – Katy Madrid

I worked dogs with DJF yesterday in a big mint field next to my house. It was just like those double mint commercials with hot twins ….only Derek chewed my ass instead of gum and I chewed Biz’s. The focus was virtually never on our perpetual gleaming smiles. Still, other than that – we did double our fun and Derek and I are built similarly these days.

I have not been working Biz, except here and there; worrying that I wasn’t helping her…because, other than opening gates, I wasn’t. Again, with training dogs, I tend to default to how I raised my children – lots and lots of slack, some suggestions….and the occasional outburst of temper over something trivial.

Biz has a nice natural outrun, but can be too wide or, if the sheep take off before she gets to her comfort zone, or fail to move reasonably – she’ll rush into them and then orbit wide after scattering their nappy asses assunder. I then chase after her, shouting obscenities until I fall into a hole and cry or she downs herself back on balance. We usually disagree on the Lie Down place and time.

Derek: “Don’t ever make her lie down unless she’s at balance. Balance is the fuel that feeds the engine. If you insist that she lie down off balance, she will stop trusting you.”

Now, this is something that I *know*, that I have LONG known…but that I seem to forget with Biz. One of us being on the ground seems to be the point of both of us being out there.

Derek: “With Biz it’s really important that you make sure she knows you are boss – because, really, you and she trade places being Lead Bitch. And I suspect you only take the role on while she’s sleeping…”
(I’m paraphrasing, but only slightly).

It’s true. Biz treats me like a peer, at best. A beloved wench. I think she assumes that I was hired into my position and, from what she’s seen, she is glad that she has me and  not some of the other Kibble Distributors and Gate Openers she’s met. She’s happy to bring me sheep because I seem to want to share the experience with her, but I should take up a stringed instrument, maybe, or throw a ball for the less talented beasts while she does her thing.  I’m just not that necessary.

Derek: “You need to make your point with her, make her respect you, but give back quickly because Biz’s big asset is her Attitude.”

Biz loves to work. She likes to get started without me. She waits for as long as she feels is fair and then starts creeping in a sheepward direction.

Derek: “Tell her to lie down!”
Derek: “She isn’t lying down. Make her Lie Down and show her you mean it.”

When Biz feels corrected, her big ears go lateral to her head. It’s a really funny look, but easy to read. It took me putting her back to where she started a couple of times, strongly, but she got the point.

Really, once I enforced her Lie Down and Stay There Until I Say Different, it all became so nice so quickly. Her outrun became less hesitant and more in contact and she stopped when I told her, most times. Because I remembered to be right, most times.

Biz is probably the only dog on the planet whom I could hope to train without a complete intervention. She is very smart and she loves to be right. I love her Attitude.  She also loves to work. I love to work too, but sometimes I’m more comfortable with fantasy.

I work Jai at night.  It wasn’t a plan at first, but it’s just worked out that way and I like it.  Before bed; before the neighbor’s start shooting toward the incessant barking that is my young great pyrenees, Inez, I have to move the sheep from the field to the night pen.  The night pen has a water tank that doesn’t freeze – just like Inez’s larynx and her incessant lust for sheep tag.

Working Jai at night isn’t radically different from working her in the day, technically.  The difference, in fact, is mostly in my head. It’s not a routine yet so I enjoy it more.  Because it’s later at night, I’m quiet, which Jai likes.  Also the dark means I have to use more than just my sense of sight and WTF… I have to be more aware in general.  Even just adding that I have to LISTEN for the sheep and their pace seems to make me process more carefully and fully. I’m not doing big outruns at night; it’s close enough that I can make a correction and run up the small field, if necessary.

As stated before, I’ve struggled to stay engaged in working my dogs lately.
This night work suits me in many ways right now, though I haven’t tried it with Biz yet.  I will soon with Biz, I think she will like it and it will suit her.

Duke…does not need the cover of darkness.  He IS the cover of darkness.
I worked Duke on Sunday and he dragged me 10 yards through sheep shit.  It would have been further, but his long line finally caught on something larger than me and my GODDAMN IT LIE DOWN.  He isn’t a fan of the Away.  He tends to take it part way and with his mouth open in anticipation.  His come by is usually nice.
Sometimes I think Duke believes, like most men in my geographic area, that with my skills and timing, I belong in the kitchen, where recipes can be read and timers can be SET.  Where a bitch can stay WARM and use her THUMBS to their best advantage.  Or maybe that’s me thinking that, laying in a trail of green slush.

Regardless, Duke’s getting to be a big dog. If I don’t anticipate the moment when his training bond with me has fractured and it’s all about the sheep….bad things unfold. He wants to be good, but I’m worried I’m not helping him.  Happily he’s young and I, in so many ways, am flexible. 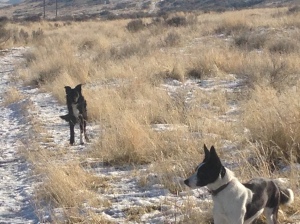