Last weekend I ran Jack in PN at Fire Ridge.  I didn't enter Jai because back when the trial opened for entries I assumed that in late October she'd be "ripe with the fruits", so to speak.  The bitch has been holding out.  My theory is that she took one look at Lavon's new puppy and said, "No. Not for me, I want a career. I'm not licking anything's ass that isn't my own."

So, I only had Jack.  And Jack did great.  I didn't have to fight him to drive, he took his whistles, moved the lethargic, tetchy ewes around the course without busting through or gripping….and on both days we finished the course.  I was very happy with him.  He's a good dog who wants to do right.  He doesn't want to be in charge, he just doesn't want to be in trouble.  When things get confusing or out of his comfort zone, he reacts.  The rest of the time, he thinks.  The thinking times are quickly replacing the reacting times.

Currently he is Lavon's puppy nanny.  And for now Jai's still sitting on it, if you know what I mean…. 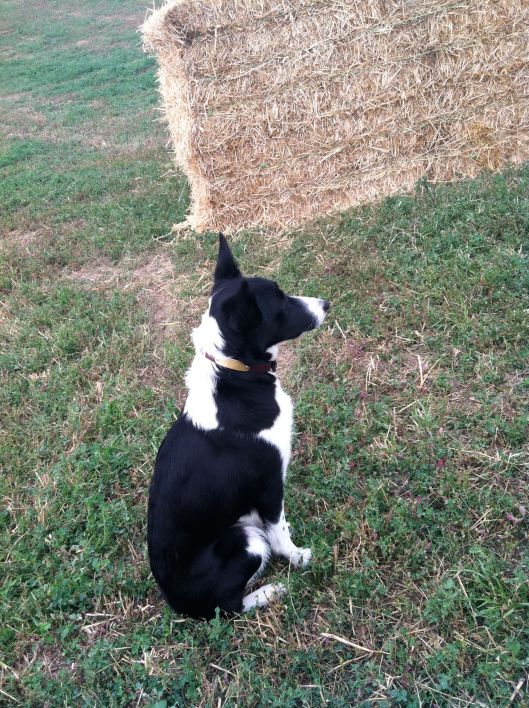 *Wag of the tail to Georgia White, I'll Keep Sittin' on It, The Dirty Blues

Something that comes up during or after every trial is What to Say to Someone After a Bad Run.

Complicating matters is that One Man's (or Woman's) Shitty Run is Another Man's (or She-Handler's) Aspiration.

Really good open handlers can have what less experienced striving handlers would consider a really nice run – they might time out at the shed, or grip off at the pen…miss a panel, but overall, to many of us it was beautiful – straight lines, dog listened, no circling and barking…Control: There was control.
Communication happened and the team worked together.  Talent was apparent.

I, myself, screeched at a fellow handler not long ago after a run where my dog, Jack, did a nice outrun, decent lift, and good straight fetch….which never ended until I retired him. I was so PISSED OFF that I COULD NOT get the dog to MOVE THE SHEEP AWAY from me more than 10 feet before he BROUGHT THEM BACK.   Jack and his sheep circled me like a drain.  The nice outrun and lift was forgotten.  All I felt of the run was the humiliation of not having a drive on my dog.  I swear I heard circus music.

As I walked off, this novice handler friend said, "Good job!"
To which I graciously barked, "DO NOT PATRONIZE ME!"
I may have added, 'FUCKER.'
(CHARM!)

It takes me awhile to disect what happened into good and bad parts. In the moment, it's all emotional. I suspect this is true of many people.  Which is why it is really important to SAY THE RIGHT THING.

Because to say NOTHING is bad, too.

One of the first sheepdog clinics I attended a few years ago was with my dog Zeke, an aussie.  We were very new to this, but I, of course, had my Delusions of Historical Greatness, like dead poets and painters are great, only without the time, talent, or work involved.  Zeke would be a badly bred prodigy.  A sheepdog genius.  All I had to do was drive the car and open a few gates.
I couldn't handle my way OUT OF A BARN, and Zeke is afraid of sneezing, but…somehow, this was, inanely, Our Sport.

Prior to the clinic, the only two times Zeke or I had been near sheep were at a basque restaurant, or the woman's house who advertised Instinct Testing/Playday!  Our lure into the world of sheepdog. She had corgis.  She charged $15 for about 10 minutes worth of your dog in her tiny round pen, circling her and 3 befuddled sheep while she drank coffee and yawned, occasionally hitting the ground with stick.  I thought it was GREAT. My australian shepherd FINALLY doing what he was (theoretically) BRED to do…circle and bark.  He did circle! He DID bark!
"He is keen!" pronounced the woman, both times, and, "Fifteen bucks, cash. I don't take checks."

Of the 4 times we drove 38 miles to do this, the woman only came out of her house twice.  The last time, she didn't even open the door. She just yelled through a window, "I got stuff to do today….You need a trainer!"
I knew this was because we were ADVANCED.  AND>>> Zeke was keen.
Keen!

I heard about the clinic from Zeke's breeder, a woman who wears snow suits 365 days of the year and trains her dogs exclusively on ducks. The clinic was at an aussie trainer's small farm an hour or so from my house. I didn't know anyone.  Everyone else at the clinic had more experience, but most were fairly new, some advanced. One by one, the handlers brought their dogs into an arena and the clinician had the handler lay his/her dog down at the gate, go to the sheep, then send the dog on one side or the other. The dog would invariably do some good things, and highlight a few areas that needed improvement, which the clinician would point out and make suggestions to fix.  The dog would go again and things would look measurably better. These problems were things like Dog not staying far enough off the stock, Dog not wanting to take one flank or the other, Dog not taking a down.

Everyone was friendly and chatty and encouraging,

"Who is Twig out of? I LOVE the way you two work together!"

"I can't believe how fast you two are advancing!"

It was finally my turn and I went in with Zeke the Keen.

I laid Zeke down, went to the sheep, and called.  Zeke immediately got up and began to hoover his way around the far edges of the corral, eating every bit of sheep shit he could ingest. This went on for what seemed like 15 hours, but probably was only 5 minutes. The clinician and I tried to get him engaged on the livestock.  I grabbed a ewe leg, apologizing (I did that a lot back then) while the sheep tried to irritatedly shake me loose.  The clinician clapped and got the fat ruminants moving resentfully away at a laborious trot.
At one point, Zeke did bark, but even that was half-hearted and aimed more at me and my running around.

When the clinician finally gave up, he said something hopeful, like,
"Well, maybe after awhile we'll try it again while everyone else eats lunch…"

I followed as the others walked to a big field where everyone's second turn would take place.  Everyone was excited about their second turn.
No one said a word to me. No one made eye contact with me.  I stood to the back of the group and tried to not cry.  Really concentrating on happy things, like Christmas and snow in the mountains, the beach… and NOT CRYING.
Finally one guy came up and put his arm around my shoulders and said, "Don't worry…it gets better."
And I sobbed. Yes! And, so to appear less weak, I said, "I fucking hope so."

I still appreciate that guy saying SOMETHING, though.  ANYTHING.

I've spent a lot of time considering what comprises a good response to these inevitable situations.  The perfect sort of response.  Everyone has shitty runs.  Everyone's friends have shitty runs.

Once Patrick handed me a Chelada(tm) and told me that Pat had done "exactly what you asked him to do."
It was perfect. I initially took it as a confusing compliment. It took awhile to decipher it down to, "YOU TOLD HIM NOTHING!! YOU LEFT HIM OUT THERE ON HIS OWN!"
(Thanks DD, translator!)

The DD has handed me a fair share of Coronas and said things like, "What were you thinking?" or "How did that work for you?" "Maybe you need a beer BEFORE you run…"

Lavon likes to just hand me a beer.  He knows to wait an hour or so to tell me what I did wrong, what I should have done…or that shit just happens.

I guess I prefer gestures to words.  In trialing on and off the field, words are more easily misinterpreted than anything else you can do.  Or if there are words, they should be words that make you think, or laugh, not just bogusly chipper cheerleader words. I appreciate what is behind words like that, but in the moment, it's just irritating to hear, "Good job!" while your dog is still spitting out wool and you are starting to fear that the words Thank You have your picture next to them in Wikipedia.

That's just my opinion. And me. I'd like to hear others.