1. One thing that you would totally redo (if you could) in regards to dog training?

I wouldn't have bought a deep sea fishing pole to use as a training aid. Fucker cost me close to $50 from the Sports Replay store and it never did fish Zeke and I out of the deep sea of suck.

When I first started in sheepdog training…with Zeke Finley, an Aussie…one of the Top Trainers (according to Zeke's breeder, a woman who wears snow pants in summer) had a video series out about how to start your pup. I bought it! It was VERY DIFFERENT from P*trick's video, by the way. There were more props and less actual stock.  Unless you count Plush Stock…This video featured a woman and a fishing pole with a toy tied on the end of a long line…and a barking aussie circling as she yelled 'Go Bye' one direction and then 'Away' the other.  This was how to teach a pup his/her flanks. Occasionally she would let the dog have the toy. As encouragement. Yes! Fifty bucks. Optimistically, I bought a pole that I thought would handle long outruns.  No, I don't fish.

2. One thing that you enjoyed doing in the past that you no longer participate in (dog or non-dog related)?

Mountain biking I was never a great downhiller, but I could climib. I like biking, but it's too hot here to take dogs year round, and the rides tend to be too long any time. So…I own a great bike, but I rarely ride. I do miss it, but I'd feel to guilty being outside on the trails without my dogs.

I don't really read training books. I just BUY them as totems or offerings to the Gods. Though not pertaining to domestic 'dogs', two books that I really liked were Farley Mowat's 'Never Cry Wolf; and God's Dog, The North American Coyote, by Hope Ryden. Although I'm sure many of my sheep friends would not enjoy reading about living with wolves or the coyote's adaptability and intelligence, more people should. I dislike the idea that anything we can't use and most of what we can should die for our convenience. But that's just me justifying not getting something out of that deep sea pole, perhaps.

4. What is the best part of dog trialing for you?

Training for it. Also watching other people's runs.

5. I totally have puppy fever (thanks to Robin and her adorable litter of Rhyme x Bill pups – I'm totally in love with Tib aka Mouse!) so please post an adorable puppy picture of one (or all!) of your dogs!

Scout and Zeke are the only two dogs I have had as puppies. 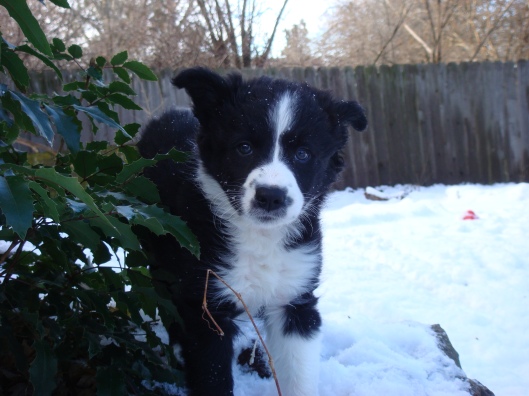 Scout – A Portrait in Budding 'Rage 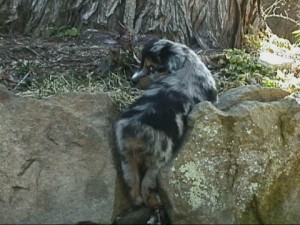