“People are always asking me, ‘P*trick Shannah*n ne Sannahan, how did you win the National F*nals…and all those other trials!? Tell me your SECRET!’

Well, my secret is these hand sanitizing wipes in flavors that dogs love – Bacon, Liver…LAMB – I never go to the post with unclean hands or an empty vegetarian pocket. I simply Wipe and Treat! Dogs love it and I always have their attention. Hint: Kids love them, too!”

“People ask me, ‘D*anne Dupree D*al, how do you train so many dogs every day and still have time for yourself?’

It’s easy with P*trick’s  new Shanny Mani – Bacon, liver and LAMB flavored instant manicure wipes.  Simply wrap your hands in these small moist clothes….wait five minutes (about the time it takes to work a novice dog, or an accomplished Other Breed around a small field) …and VOILA! Your hands LOOK and FEEL….AND SMELL ….great!  ALSO come in Patty’s Pedi Pedicure Wipes for working in the big fields with more talented dogs.

“People come up to me after my run, lately, and say, ‘HOLY NONKOSHER CHRIST! HOW have you IMPROVED SO MUCH in such a short time, (insert name of someone applicable),?"

I’m tempted to not tell them… [insert gentle chuckle] but that just wouldn’t be right… so I just hand them one of these [greasy dripping moist towelette, followed by a small swarm of wasps] and one of these [jar].  If you are like me, you are absolutely driven to distraction by wasps and flies at the post. I couldn’t think, sometimes I couldn’t even whistle. GOD KNOWS I COULD NOT SHED to SAVE MY SOUL.  ALL THAT ….BUZZING AND STINGING!  Then P*trick came up to me one day and handed me his P’s B’s Bee-Gone…and a jar.  These greasy moist clothes smell so strongly of bacon and mountain dew that Bees and Wasps and several species of fly cannot resist.  They stick to the cloth and die.  Then you can feed the cloth to your dog after you win! It’s that simple!”

Order now and we’ll throw in a towel! (The Shanny Shammy)

I've been housesitting for the DD's again.

Which means I'm getting to work Jai every day, which I will write about later.

Also, running in the desert, which we just finished doing. 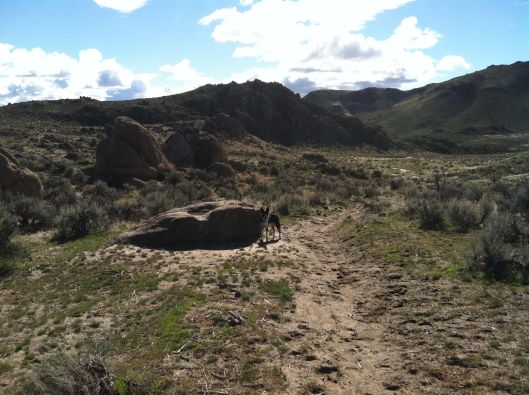 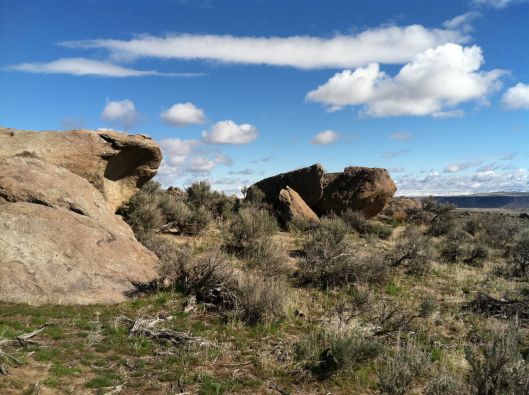 Also running in the desert with Jai and I, but not working sheep is Scout…seen here without her nose:

And I've been doing some marketing research for Products that I'd like P*trick and DD to endorse so that I can become Sinisterly Well Off and hire someone to yell at dogs for me, plus spritzer Jai and I and Scout with water while we run.  Also included in the job description will be providing a tough ankle at which Scout can occasionally lunge that isn't my own.

Because, let's face it, this little Sheepherding/trialing gig is nice, but I see a few too many Walmart bags in DDs pantry to say she's heading for the Big Time on her own.  And P*trick …he has to dust his own trophies.  THERE IS NO TROPHY ROOM, either. They just sort of sit out. On a shelf.  With other things.

Anyway.  Things are going to change…I can feel it.

How many times do I hear a student whine about working dogs in inclimate weather? I just chuckle to myself remembering back when I thought I had to work dogs in the rain and snow… but that was before I invented The Whistling P*trick.

The Whistling P*Trick uses pyrotechnic models to create a whistling stob that can be set in your pasture or adjacent to the working arena (should be a minimum of 150 feet from your dog or anything flammable).  When lit the Whistling P*trick will whistle an array of commands for up to 20 minutes.  Comes in 3 convenient models:

Novice – One whistle: Lie Down.  Repeated in 1 – 3 second increments until the end, which is when the stob just sort of fizzles to a stop.

PN – Three Whistles: Lie Down, Come By, and Away…plus a recall finale.

Open – This can burn for up to 30 minutes and has the full array of welsh tones, including those contained in the PN model, plus Look Back, Steady and Walk Up.  Ends with a spectacular recall, plus a fountain of color.

For an additional $39.95 I encourage students to purchase the D-Nome.  It’s a small blonde motion activated garden statue that can detect when a dog has responded correctly to a whistle. If not the D-Nome will growl,

You can purchase additional corrections from PTones(tm)  and download directly to your D-Nome for .99 each!

It’s worth it! I got Riggs to the finals, and WON, and I never left the house until May!

Here is Jai moving a group of seemingly cooperative ewes.  It's a calm scene, to be sure.  The ewe you cannot see, the tiniest one in the middle – Number 44 – is a sinister beast.  Just as hateful and accommodating as a basket of rattlers.  Satan's little lambchop.  Emphasis on CHOP.  She wears her eartag low and crazy-like. She goes from sheep to EEP! in 15 seconds.

That she is in the middle and tiny is just part of her TRICKERY.  She is the same ewe that turned and chased Jai, and Kelsey's dog  Ewen, both this and the previous weekend.  She just snaps at some point, like she's channeling some sort of nasty member of the weasel family and turns on a dog.  Runs straight at them.

That said, it happened in the perfect place this weekend for Jai to take charge of the situation and have Good triumph over Evil.

We were at the pen when Number 44 turned on Jai, ran at her, and Jai hesitated, like her internal WTF o'meter was going off loud and clear.  Jai started to look doubtful, but I was right there and encouraged her to grip,

And she did. A nice quick grip. Nothing too hard, or cheap, just a lunge at her nasty little face.  The sheep turned and went in the pen.  It was sweet.  Jai wagged and I wagged and Kelsey said Jai was her hero.

And I have to say she was mine also.

We have probably learned all we can from number 44, though and now we'll avoid her.

﻿Last weekend I put Jai on sheep for the first time since I left; since our last trial in February.  I have been telling everyone who will listen, and even some who, frankly, will not. Are sick of it. Can't we talk about ANYTHING ELSE??? …what a great dog Jai is. The best dog ever.

I was excited to work her again. My delusions of Greatness were in full bloom.

We were to work in Dianne's little field, initially.  It was cloudy with a 30 percent chance of me being chided.

I sent Jai on an outrun, she gathered the sheep, brought them back, maybe a little fast, but she took her down and was taking a steady as she got closer ….the real trouble started when the fetch ended and Jai started to drive them back out, reluctantly.  A lot of Jai stopping and looking at me.

One of the sheep, a ewe with an attitude, and, let's be honest, a ratty coat…like something someone who mumbles about her feet and the neighbors' in the same breath would wear,  chased her down. I mean turned and CHASED HER a good 20 feet.  I stood there and watched the whole thing.

"That fucking sheep!" I believe were my words.

"Jai picks fights," DD said behind me, behind the fence, "You are going to have to watch her….now you need to help her."

Every time Jai would move toward the group of sheep, three would move off and that nasty blight in nappy sheeps clothing would turn and threaten her.  Jai did a lot of standing, looking at me, and wagging.  She did the Jai equivalent of deciding to get her instinct certificate, have it framed and move on to something else.  Maybe agility.  Or just spending time together.

"Should I wack your sheep? Rough it up a little?"

I twirled my stock stick.  Stabbed at the air, experimentally.

"NO! Encourage her to grip. Now would be a good time to teach her gripping as a tool."

Jai wasn't thinking of getting anywhere near that ewe.  She was enjoying a moment of repose, looking intently away.  I was considering a good cry. Strong drink.

DD came out with us and told Jai to walk up; she (Dianne) clapped (although it would be a nice trick if Jai could do this) and spoke encouragingly,

Dianne walked about 20 feet beside/ behind Jai as she flanked her left and right.  The sheep, all of them, even Aunt NappyAss, moved nicely out into the field.

DD and Jai returned to where I still stood, mostly humming.  I had perfected the stick twirl, though THAT went unnoticed.

"Now, you send her on another outrun and when she gets stuck, encourage her!" DD told me. Jai wagged.

I did, same thing happened, we worked through it, but it wasn't easy. Jai still did NOT want to move those sheep, not for me. That one ewe still lagged behind, always threatening to turn and Jai clearly was not sure of herself.  I felt sort of …oh…like I'd turned my really really good working dog into a sweater model.  Everytime I looked at Jai, she wagged, like always…but I could almost hear her saying,

"Why don't we just cuddle?"

"I know what you are thinking," Dianne said, when our friend Erica's turn had finally come and I was standing around thinking dark things that I can assure you Dianne DID NOT KNOW,

"You are thinking that the wheels are falling off.  That she's never going to work again…"

Okay. She might have known SOME of the dark things.  But if she knew more, she was tactful in not bringing up Jackie Chan or huffing Whipping Maid.   A cringing Sherry Lewis, Lambchop, and nipple clamps…

"This is just part of Jai's development. It's a good thing.  I've worked through this with all my dogs…Jai is going from being a dog driven by command to a dog using more of her own instinct.  She'll be fine.  We'll drive some sheep down to the big field. She'll do much better out there.  Take Jai and get the sheep from the corral and drive them down the road. I'll load up and meet you down there.

It took Jai and I 15 minutes to get the sheep out of the corral.  The ewes kept moving from a corner near a dog pen to another corner near a round pen and Jai wanted nothing to do with corners.

Finally I left my place near the most recent corner and walked to the gate.  Jai ran in and gripped the smirk off that crusty piece of chewy entree and within seconds had them out the gate and down the road.  Jai wore a beard of victory hair for half the way.

She has not hesitated since.  She is a great dog.