"You didn't buy a trained dog!"

Dianne often finds it necessary with me to speak the obvious.  I think I should have signs made for her and she can just picket all my working sessions.  Or hang them on her pasture fence.  Maybe get sponsors.

"QUIT REPEATING YOURSELF. CORRECT HER!" (Budweiser)

"SHIT IS NOT A COMMAND!" (Greenleaf Friends Church)

"PICK ONE THING TO WORK ON! NOT THREE!" (Association of Retarded Citizens)

Which means teaching Jai to walk on her hind legs and do her floor routine to Disco of the '70s will have to wait. As will voting responsibly.

With Jai (yes, I'm back to that. Fortunately she doesn't wear her 'HELLO, MY NAME IS  'JAI' 'JAY' "JAYCE 'GODDAMN IT PLEASE PLEASE PLEASE DON'T LET ME TURN YOU INTO SCOUT' 'JAI'  nametag. Anymore) it's necessary to remind me that she can't be expected to know everything. She is not an open…or even, yet, pro-novice dog.  She's a young dog with SOME TRAINING.  (But she is smarter and prettier than YOUR dog…sorry!)  That she isn't fully trained and ready to vault me into Greatness as my Delusions dictate is hard to keep in mind because so much about her is easy and perfect.  She's very sensitive and responsive without losing her head, usually.  She takes small corrections.  She seems smart enough to patronize me.  She's sweet enough not to.

So I tend to push her and attempt to make her do too much …outrun, drive out farther than she is completely comfortable with….then a crossdrive…(which is when Dianne starts to chitter behind me like a censuring squirrel) because so much of what she does do …she does really right.  BUT, her issue, like mine is CONFIDENCE.

Mostly this manifests itself in her going WAY WIDE on her outruns, and me whining 'nonononono'

Dianne has suggested that I (stop whimpering and) walk her up halfway to the sheep and then flank her, stop her if she starts to blow out wide and then walk her up again, flank, repeat if necessary.  This seems to work.  Of course In My Humble Opinion we haven't tried begging and crying and me threatening to quit yet.  I like keeping things simple, if possible.  One or two steps, tops.

Next, Dianne let me work Reggie today. I've worked Reggie a few times.  He's a beautiful dog who looks very much like the wolf in the old Little Red Riding Hood stories.  He works nicely initially until he figures out just how much one (me) does not know….like geometry and how to use it to beat him to the sheep.  Then he circles and circles and beats one (me) to the sheep and the poor second place bastard (yep) circles and circles trying to beat Reggie to the sheep, but is never quite fast enough….

"DON'T LET HIM GET THE SHEEP!" Dianne yells, sipping her beverage from the sidelines.

"WHERE DID YOU LEARN GEOMETRY!?" (Boise State University)

"DO YOU EVEN KNOW GEOMETRY?" (College of Idaho Liberal Arts Program)

"TELL HIM 'NO'!" (National Organization for Women)

"TELL HIM 'NO'!" (Planned Parenthood of Idaho)

"TELL HIM 'NO'!" (Committee to Re-elect Butch Otter)

"CALL HIM TO YOU!" (Greenleaf Friends Church)

"DON'T LET HIM GET THE SHEEP!" (Idaho Basque Museum)

Yes. This went on for awhile. Reggie did get the sheep, Reggie did not get the sheep. I DID NOT FALL.  I stayed on my feet because I'm in GOOD PHYSICAL CONDITION…Finally Reggie DID LIE DOWN. I wanted to, but instead called him off and we went to the shop where his crate is located.  And, as it happens, a back door…into the sheep pen.

"DON'T LET HIM GET THE SHEEP!"

Another 5 minutes of this. AND THEN, after Reggie is crated:

Dianne: "The first part of your working him looked really good. You should run him in novice."

These last few days through tomorrow, I am house-sheep-dog-sitting for the DD.

This is good for me and J because it is unlimited access to SHEEP.  I can't believe DD left us alone with them! UNSUPERVISED!

We are learning many tough lessons.

Then, J and I sorted off 5 ewes, took them out of her pasture, across a little bridge and into the big field. We worked together nicely.  Her weakness is that she lacks a little confidence. (MINE TOO! Plus, the bad language…oh, and beer.  A really good chocolate cake…I digress.)

The further away from me J gets, the harder she is to move and the more I have to work against her wanting to overflank and bring the sheep back to me.

Thursday things TURNED TO SHIT.  I had a really End Times awful day.  Work, personal, everything.  Somehow even my car, left with windows cracked open in Greenleaf, was filled with flies. I fully expected the minivan in front of me on the highway over to unman and some smirky family of 12, plus a terrier, to ascend, leaving me stuck on the freeway in between Meridian and the Cheese Factory behind a car I'd never consider driving.

At DD's, this time J could not get the sheep off the fence of the small pasture.  We'd sort 5 out of the gate, they would run to the fence bordering the canal and there they would stay until she panicked (and I panicked) and she chased them DOWN the canal…and then BACK to the spot on the fence.  While I screamed and whined.

I said the word 'FUCK' at top volume enough times to send some kid to college were there one of those Cuss Jar types around.  A good college.

J was not building self-confidence, meanwhile.

I felt especially shitty about this.

We put the sheep away and I worked her in the small pasture.  We did small stuff, short drives, small outruns; I was discouraged with my complete lack of communication skill. The sheep seemed smirky.

I expected the pasture to become unsheeped. The 11 ewes, plus J, to ascend leaving me behind with that fucking horsse (sorry DD).

We concluded our working session and I drank 2 beers in rapid succession.

"REMEMBER," DD said via phone, "This is about communication: Learning how to communicate with J. It doesn't have to be about the TASK at this point.  Try some things and WATCH YOUR DOG. This is the one time I will tell you to watch your dog instead of your livestock. Watch J's reaction to what you are telling her until you find a way to communicate what you want that works for her."

Friday – Again, J easily sorted off 5 sheep and moved them down the road, across the bridge into the pasture.  I was much calmer, having decided that, as DD said, even if all we accomplished was for J to feel good about getting the sheep off the fence and my being able to help her do this, that was all we needed. A key piece to our relationship would be accomplished.

In the field we worked on her driving and cross-driving and some outruns.  On the last outrun she went way wide and I had the sheep put away before she noticed they were missing and came back….but…she's not a lover of the Away side in that field.  I felt good about the other stuff.

Today we will work on the Away side in the big field.

It's hard to remember that I only have to accomplish something as seemingly small but really ultimately huge as learning to build communication with J; that just because we have a huge field and access to sheep, doesn't mean we have to complete a course to have a successful day working.  It's much easier though to break it down to that. Or so I think. Ask J.

My whistles are killing bees, though, I'm pretty sure of that.

I worked Jayce this last weekend in P*trick's fields and in Dianne's.

One thing P*trick had told me, a capsule of wisdom that in my system, like most pieces of good information, takes…a minimum of 3 days to dissolve and be absorbed, is that,

"With Jayce -you need to set her up right."

That is "up <space> right". As in correctly. Not upright…as in on her back legs, which, by the way…she can do. She's very agile.  She's also just a touch lacking in confidence.  Which is why I SUPPOSE P*trick meant that maybe I shouldn't try to do a 300 yard outrun with her starting 100 yards behind me.  (EVEN standing on her back legs…)  Because she tends to go a little wide.  As in County-wide. I feared for sheep in other time zones.

She is very nice, though. She is easy to correct, softly, and she is both quick when she needs to be and slow enough the rest of the time that I have an opportunity to think…and sometimes I do.

Sometimes I think about other things, though, and insteading of issuing a command I might be contemplating new footware or if the Indians called 'corn' 'maze' what did they call 'corn mazes?' and….we find the sheep racing back from Dianne's neighbor's field into the open gate of her small pasture. 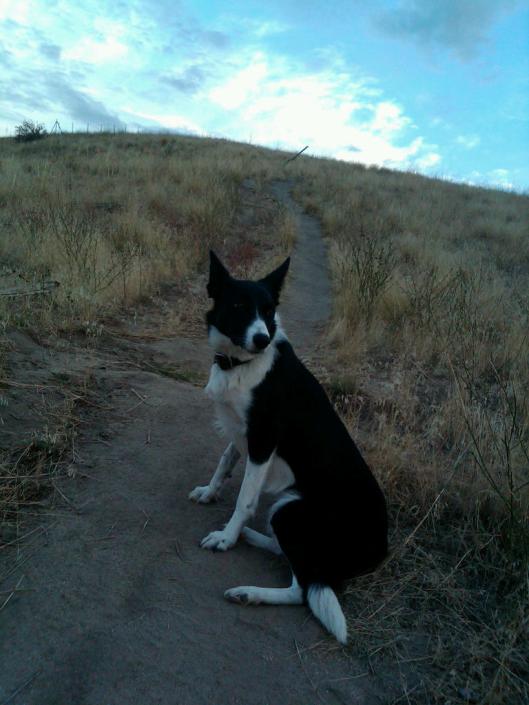 I've changed her name because someone told me Jai meant Victory in Hindi.  No offense to the Hindi, or my pasty white friends who like incense and saying 'Nomaste' like they have multi-cultural tourettes.

I'm naming her after what the lady at my favorite Mexican food restaurant says when I ask,

"Do you have Corona Lite?"

She, the dog (…but..well, both dog and waitress, really) is very enthusiastic and sweet.  I haven't worked her yet, but hope to this weekend. Then will begin our steady progress into greatness. Yes.

In the meantime she is running with me and wagging at all the trash I talk.

"Do you think Jasper is getting fat, Jai?"

"Have you noticed that People Who Aren't Me aren't as Nice and Intelligent and worthy of Laying the Fuck Down for?"

"…Except P*trick and the DD"

Everything about her says, "Jayce!"