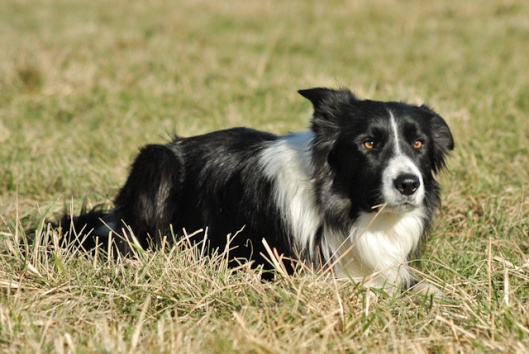 I haven't written about Athena or Palm Cottage, my two last trials… and my last stops on the Summer of Suck Tour.

Athena – Sure enough, as the bagpipes blew, I sucked; Pat tried to compensate for the small field and my timing.  He was a little pushy, and combined with my timing….things were not great. Still, it was good for me. I stood at the post, I yelled a little, I stopped Pat and made a few good choices, had another opportunity to experience both running a course with a good dog and sucking in a few new ways.

Palm Cottage – This is one of the most beautiful trials ever and a lot of fun.  Pat worked really well for me the first run …the second run did not go as well. I failed to notice until the sheep were going around the post, the wrong way, that the drive panels had been changed.  Still, a good opportunity to suck in a new way.  Dianne commented that its good I'm getting all the mistakes that can be made out of the way relatively quickly.

Pat has gone home to live with his original owner and so I'll just be setting sheep at Lacamas. I'll be setting with Susan and Angie; I'll be using P*trick's Rose and it will be great.  I love working setout.

I will also go back to training Scout.  I might try valium for us both.

"I don't consider myself as being talented so much as being skilled. I worked my ass off to get where I am." – Derek Fisher

Derek talked to me about all the time he put into learning how to run a dog.  He said that it's irritating when people chalk up his skill to 'talent'…like it's just something he was born with, like great hair and the ability to roll one's r's.

He spent hours every day learning to run his first dog.  He read books about training and managing working dogs and sheepherding. He learned the practical need for the skills we use in trialing.  He said this really helped him understand and take this understanding to a broader level.  He said that initially people want "A + B = C" but that doesn't really exist. Or its not helpful.  Not if you want to be good.  It's like the difference between an obedient dog and a dog with feel.  You can run an obedient dog, but a dog with feel will be your partner.

Patrick and Riggs had a really really beautiful run on the last day of Palm Cottage. They scored a 94.  At the pen, Patrick doesn't give RIggs commands, he just says his name.