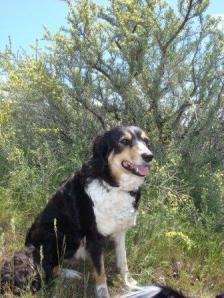 It's tick season.  I pulled one off my leg this morning at work, MUCH to the disgust of my cubicle neighbor, Don, who likes include Dancing with the Stars and Sports programming, fast food and vacationing in Kansas.  The tick was not embedded on me, but rather crawling up my leg as I was standing at the entrance to our adjacent cubicles chatting with a  fellow co-worker.

I casually grabbed the tick, squished it, and threw it into Don's garbage, which was closer than my own. It joined some wrappers and a 16 ounce coffee cup from Starbucks.  Don had eaten a twix candy bar and some cheese sticks; all before 9 am.  I decided that this was probably none of my business.  Still, he and the co-worker I had been talking with seemed to be waiting for me to say more.

"You ate a Twix for breakfast?" I asked.

"DID YOU JUST THROW A TICK IN MY TRASH?" Don shrieked.  He bent his
upper body in the direction of the garbage can without moving his
lower, stubbier half. The half that needed the workout, frankly.

"Ahhh ticks," I sighed, "For the next month I'll be picking these off man and beast around my house."

He gaped at me.  Either his disapproval was oozing thru his pores, or the TWIX had left it's mark.  His frown was deep indeed.

"I killed it first," I assured him.

"Those things CARRY DISEASE!" he said.

"That one's disease carrying days have come to a close," I said, "next to your TWIX CANDY BAR AND TWIN CHEESE STICK WRAPPERS…"

Rather than admit to his own unhealthy choices or apologize for being a hypocrite, Don stomped over to the can, picked it up and marched it straight outside, placing it in the corner of the building next to the smoker's picnic table.  I followed him part way, but got distracted by my inbox and someone else's fax coming in.  I knew where he was taking it. He hates smokers.  I think he also hates picnics.