I told the Trix that Eric was getting me a boob job for Christmas. I didn't actually MEAN to, but that's what she heard and I decided to go with it. My mother loves Eric. In her eyes he can do no wrong. His job is the most dangerous, he is the nicest and the hardest working….He's a walking superlative. At the moment, he was out shoveling paths in her yard for the dogs. I was eating my 5th cookie, which she'd made for Eric. She often thinks I should cook more. She brings up the time, over 20 years ago, when she visited my house and had to rake the carpet, because I didn't own a vacuum cleaner. Or a broom. (I was poor. Too poor to afford beer AND clean floors).

When she asked what I was getting Eric for Christmas, I said I didn't know yet. Which is true. I haven't done ANY SHOPPING. I'm a lazy bad wife procrastinator.

She then wondered aloud what he was getting me, I told her,

We could both see Eric out the front window, shoveling her sidewalk, and the neighbors. Nine degrees and snowing, he had been out there for over an hour. When he came in the house, eventually, he would tell her he enjoyed hard work. Fucker.

“Yup. A boob job. I don't really want a boob job, but he said my boobs aren't just about me, they reflect on him, too, and his success. My flat wilty chest makes him look like a proletariat. He said he might as well be driving a Kia or some sort of Dodge sedan.”

“Well, I'm shocked. I guess you never know…” Trix said, “Don't get a boob job. To hell with that. Do you want another cookie, dear?”

“It's the last one, Mom,” I said sadly, taking it anyway. I'll tell her I was kidding later.

A little while ago I took Zeke and Scout for a walk down the street to Tubb's Hill. Dogs are so easy to make happy. Scout didn't like the moose statue at the trail head, and she disapproved of all the activity downtown, but then so did I…. She loved the snow. She enjoyed waylaying Zeke. 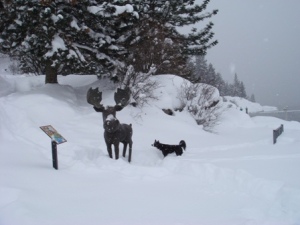 Zeke loved every minute of our walk. Zeke is a joy-filled dog. He woo-woo'd all the way to the hill, and he and Scout chased each other and played. He circled and twirled and bowed at my feet all the way home. 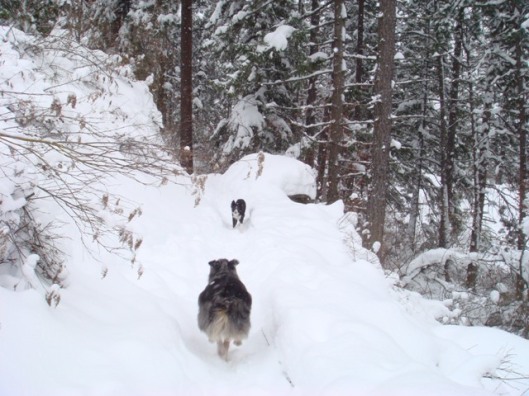