Yesterday I saw how different two sisters can be.

(No, not me and the Original Judy, though we, too, are very different in that I am relatively social and sane, middleclass and employed – OJ is cloistered and crazy, wealthy and employed mostly with just chewing her own food. Unless she has her husband doing that, too, now…MEOW!)

Jaenne and I had our dogs out at Dianne's.  Scout and her littermate Mo are opposites in almost every way.  Mo is a merle, scout is black and white.  Mo is outgoing and friendly, Scout is furtive and shy, Mo has eye, Scout has none.

Scout and I continued to work on her getting off the sheep and me figuring out timing (I'm consistently about 2-5 seconds too late on everything). I did time one thwap on Scout's nose with my stock stick just right and that really seemed to be effective in emphasizing the seriousness of my GET BACK command and respect of my body pressure.  Scout got back after that.  I felt bad, afterward, but it really changed things.  Anyway, I bought her ice cream and a pony on the way home and let her drive (just steer, really. She can't quite reach the pedals).

Not really. Though I'm sure Jodi and Dianne both had to think about it for a sec.  And worry.  Scout is not ready to drive.

On the other side of the genetic map, Jaenne and Mo worked on breaking down Mo's eye, keeping Mo on her feet.  They worked in much slower motion than Scout and I.  They had more luck in the big alfalfa field than in the arena, which was too much pressure for Mo.  Scout and I have worked in the field and have had good and bad days, but we needed the confines of the arena to establish some pressure sensitivity in Scout and some sense of timing in me.

Dianne talked about Mo being more mature than Scout, and that Mo's
position in her pack of 2 dogs is one of responsibility (Jaenne's other
dog, Kip, has seperation anxiety and leans on Mo) which has a big
effect on a dog's rate of maturity and confidence. Scout is at the bottom end of her pack of 4 in my house.  Maybe 5, if you count the cat.  Thank god the hamster died.  My position is slightly above the cat's.

Jaenne and Mo are advancing faster than Scout and I.  Initially I envied that, but I believe that Scout is teaching me what I need to learn.  Scouts issues are very complimentary to my own.   Plus I love this peculiar little misanthropic dog. 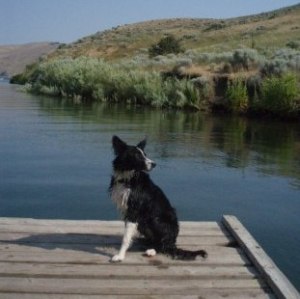